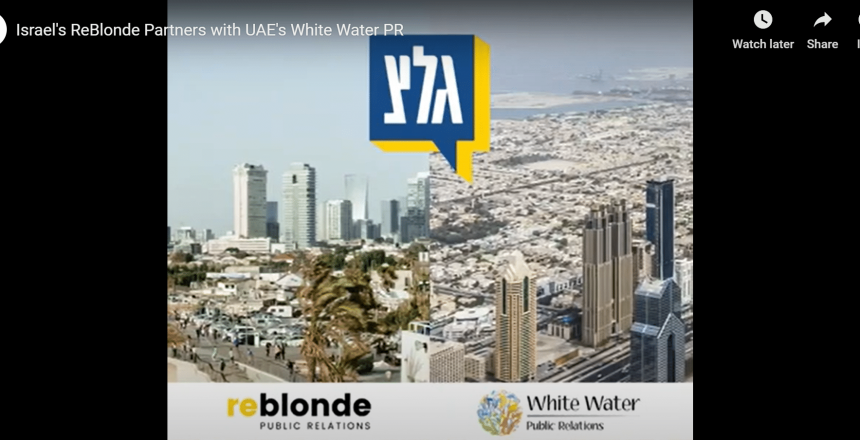 We at ReBlonde are pleased to announce a historic partnership with the UAE-based White Water Public Relations agency. There is a great deal of symbolic power that comes from such a partnership, which was officially announced following the Israeli/Emrati peace agreement, also known as the Abraham Accord.

The untapped business potential that could flow between the two countries are endless, and the partnership between ReBlonde and White Water PR is historically the first between two companies in their respective regions.

In an interview with i24 News Israel, our CEO, Motti Peer, discussed how the partnership with Prem Ramachandran, CEO of White Water PR, came into fruition. Peer stated that despite the fact that ReBlonde is located in Tel Aviv, which is a part of the “startup nation,” all its clients are actually looking to gain presence overseas. “Many of the companies that are looking to get publicized overseas are technology companies, and we are working mostly with technology companies. Since we are global facing, Prem did the necessary search and was actually able to look us up and located us. We knew that we had no time to waste because of the potential of the two regions.“

In that same interview, Ramachandran went on to add that White Water PR handles “…a lot of technology clients who are into blockchain, artificial intelligence, and we take care of clients in different industry sectors like hospitality and healthcare. So we were wondering… why don’t we establish a relationship with a company in Israel who would support both the relationships in terms of getting visibility in Israel; as well as for companies who are based in Israel to have visibility in the UAE? So we wanted to establish a relationship which will be mutually beneficial for both.”

You can watch the full video below.

In an interview with the Israeli radio station Galatz, Ramachandran stated that the goal of the partnership is to give PR services to companies, regardless of whether they are Israeli, Emirati, or from other parts of the world, so long as they want to do business both in the UAE and Israel. The collaboration especially shows promise as Israel, and the UAE are both leaders in innovation and show strong common interest in financial technology, blockchain, real estate, medical technology, and fashion.

You can hear more about that here (some Hebrew with English captions in the bottom):

According to a report published by IVC in January 2020, $39.1B was raised by Israeli tech companies, which reflects a decade of prosperity since 2010. CB Insights reports impressive growth in the UAE in the past decade, as the number of equity deals to UAE-based tech startups reached an all-time high in 2018, up nearly 200% from 2015.

The Israel-UAE peace agreement, which establishes full diplomatic relations between the two countries, is just the beginning of an infinite number of possibilities in business relations, tourism, direct flights, scientific cooperation, and, in time, full diplomatic ties at the ambassadorial level. While the two countries already had respectable ties, the peace agreement brings it into the open and makes it official.

Here’s to new beginnings and a prosperous future!